Rivets and bolts can drive you nuts!


So here I am again, after another fortnight of tiny rivets and glue fumes...
HMSW Gargantua is really taking shape now, although maybe not as fast as I'd like. As you can see, the interior details of the vehicle are mostly complete and the outer hull is not far off.

Work has also begun on the legs. The height at which the model is supported in these pictures (balanced on a wine glass) is the actual height the final piece will be... Huge! I temporarily fixed the leg together for the sake of these photos. Aren't I a nice Colonel?!


I have yet to settle on a design for the feet, but I can tell you that I'm favouring a cloven-hoof style. There will, of course, be many pipes, pistons, cables and rivets!

In other news: I have begun work on a box of Perry Plastics American Civil War Infantry, to be fielded for a ten-a-side skirmish in Leadwood at the upcoming Call To Arms convention in Wellington, August 20th-21st. The Union troops are almost done. Here's their Captain, done with my usual inks.
I'll post pics of all the protagonists when they are ready. 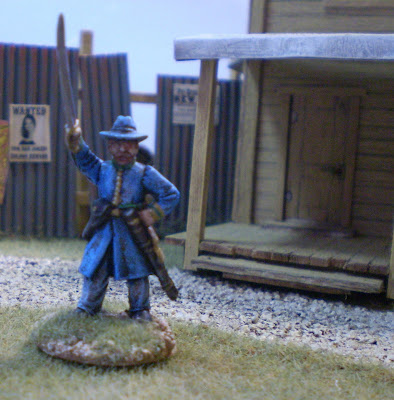 Anyway, that's all for now.