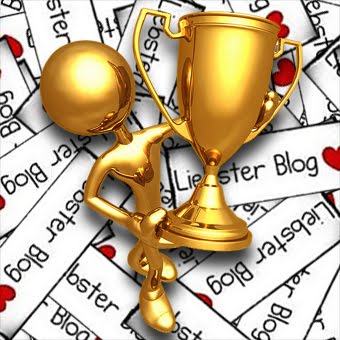 Just a quicky to say a big THANKYOU for not one, but TWO Liebster Blog Award nominations...

A year and a half ago, I didn't even know what a blog was. Funny old world, innit?

Anyway, my sincere thanks to regular commentators Michael Awdry of 28mm Victorian Warfare and Jay of Jay's Miniature Enterprises for recognising my blog and passing me this honour. It is very gratifying to receive the respect of one's peers, and the comments and encouragement I receive from not just these two fine gentlemen but many other followers of this blog are what keep me creating and producing the machines, terrain and creatures I feature here. It would be hard to find the enthusiasm without all of you.

The rules of the Leibster Blog Award are as follows:

(copied and pasted from 28mm Victorian Warfare - thank you, Michael!)

1. Copy and paste the award on your blog linking it to the blogger who has given it to you.

2. Pass the award to your top 5 favourite blogs with fewer than 200 followers by leaving a comment on one of their posts to notify them that they have won the award and listing them on your own blog.

3. Sit back and bask in that warm fuzzy feeling that comes with knowing that you have just made someone's day!


So, in the spirit of the award, I shall endeavour to select my five nominees. My apologies to anyone not making this list -  I know many followers of this blog have blogs of their own and I have viewed quite a few from time to time.


In no particular order:


Colkillgore at My Little World Of Dementia - Colkillgore was a vocal and jovial supporter of my blog right at the start and I have fond recollections of our humourous exchanges. He is imaginitive and entertaining - and that is what blogging is all about!


J Womack, Esq. at Victoria's Boys In Red - Another fine fellow with whom I enjoy the occasional bit of banter. Our shared shared enthusiasm for VSF/Steampunk makes his blog a favourite.

Frank Chadwick at Frank Chadwick's Space: 1889 Blog - The legendary Frank Chadwick, godfather of VSF roleplay and wargaming was responsible for getting my brain started down the slippery slope that led eventually to VSF insanity. Unbelievably, he qualifies for this award, as his blog (at time of writing) has fewer than 200 followers. Why? I have no idea! Such injustice! Frank has also been kind enough to give my work great reviews a couple of times - full circle, so to speak!

Anton Ryzbak at Anton's Wargames Blog - Anton recently produced some wonderfully realised warships, with a rivet count to rival my own! I find his work to be well thought out, very cleverly constructed and great to watch as it evolves.

Roly Hermans (Arteis) at Dressing The Lines - Without Roly, I simply would never have started my own blog. When Roly posted pictures of my Wild West town, Leadwood, on his pages, he started to get very excited about the response and pushed me to 'get blogging' - thank you, Roly! I have greatly enjoyed Roly's insights into wargaming, his beautifully presented armies and facing him (not nearly enough) as an opponent.

So there you are! There are so many more I could have (and should have) given a nod. But them's the rules, as they say...


I've had a few days off work this week, and in preparation for the big walker project I announced a little while ago, I thought I should try to get a few odds and ends finished and out of the way.

It turns out that I have been suffering from a bout of Modellers' Disease - the main symptom of which is the habitual buildup of unfinished ideas, each one abandoned in favour of a newer and more interesting one, until the workload becomes unmanagable...

Sound familiar to any of  you?

Anyway, I had let the Flunks I started some time ago languish on my shelf. "Enough!" I cried. Inwardly. And I set about finishing the big bull.


Firstly: I wasn't happy with the stubby little horns around the 'fan' this big fellow displays. I wanted something far more impressive. Browsing my Big Box O' Bits, I found GW Elven archers sprues held the answer - nice ornate, pointy bows... Making sure I had enough identical ones, I cut these into halves, carefully removed the horns I had sculpted onto the Flunk and replaced them.

"Nice one," I cryeth. Inwardly.

I might previously have made this from balsa, but for strength, I decided to use plastic. Using a sheet of 1mm thick styreme, I was able to get a wood grain effect by scraping the sheet all in one direction with very coarse sandpaper. Following this, I scored 4mm wide planks using the point of a sharp knife, dragged sideways. This created grooves without leaving an upward-turned edge.


Next, I built a frame for the howdah across the back of the Flunk. At this stage, the frame was removable.


Planking completed the basic shape and the howdah began to take form.


Now the structure of the howdah was reinforced with brass sheet, studded with rivets. Square panels were also added, by way of providing armour and decoration.


I wanted the structure to have two storeys. A tower was built for the centre and surrounded with a curtain of brass sheet to add a little more decoration and colour to the model.


And so began the painting...


Once the planking and armour were painted, I glued the howdah in place and gave some thought to further detailing. The straps beneath the howdah were not enough on their own, so I added chains as well. This was a very fiddly process, but well worth the effort. You may recall I did something very similar for the swing-bridge in the neck of HMSW Gargantua.

It wasn't helpful to discover that somehow my pliers have become magnetised... The chain kept moving of its own accord...


With the howdah in place, I turned my attention to the means of steering the beast. A driver - or Flunkee, to give him his correct title - was put together and painted, and shackles and reins constructed around the Flunk's great horns.


The reins were made from brass foil, as with my earlier dinosaur cavalry. The shackles around the horns are also brass foil, but with the edges folded in to give a greater thickness.


Finally, the reins et al were painted. And hey presto! A completed Flunk! Now all that remains is to provide a crew...

All in all, pretty good. One more project ticked off the list.


That's all for now!