Being a single father, one has to set aside meaningless trivialities from time to time. There is laundry to be done, a day job, cooking, washing the car, making the bed, feeding the cat (and the kids!) and the list goes on and on. Sometimes it can be hard to prioritise.

Consequently, I have managed to do quite a lot on HMSW Gargantua in the last few days! 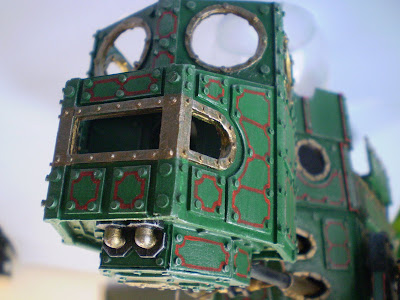 When I last posted, I was still working on rivets, etc. on the underside of the head. Now, 87 rivets and some paint later, it's looking pretty solid!


But the bulk of the work recently has been in finishing that first leg. I.E.; the feet had to be designed, built, painted...


After a couple of test designs I wasn't happy with (many thanks to my son, Anthony, for pointing out the not-good-enough factors) I finally hit on an idea that suited.

I found some old plastic casters in my bits box. With the wheels pulled out, they were a perfect fit - a really good start to a mechanical foot.


After a bit of plasticy-greenstuffy-rivetty-clayey stuff and nonsense, the first foot came out all right!


Only three more legs to go!

For those who are keeping count, the first leg has 174 rivets and the foot has 90. That's 264 per leg! This means that on completion of the remaining three legs, I will have added a further 792 rivets... Hmmm. Wish I hadn't just worked that out!


Anyway, my total rivet count now stands at 2,526. Any predictions for the final figure? The end is getting close! 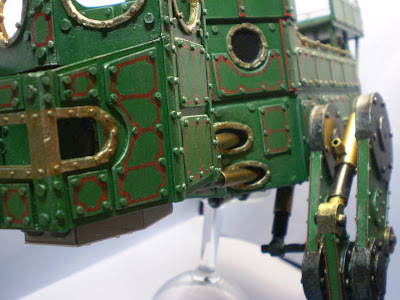 Well, it finally happened. I was sitting in my room, looking at the walker, with no intention of working on it tonight, when I suddenly thought to myself, "I know! I'll glue the first leg on!"

Of course, this was not as simple a matter as it might sound... And so began a few hours' work...


I had already mostly made the first leg (the others are presently cunningly disguised as a pile of assorted components) but now came the time to build the pistons and associated parts to drive the legs. This, I admit, was something I had been putting off.


I am hoping that HMSW Gargantua will be free-standing, with no need for a base or supports, other than her own legs. With the spindly design of the legs, I had my doubts.


In order to make the join as strong as I could, one part of the thigh was pinned and glued in place, along with its driving piston, before the rest of the leg was attached to it.


I also added a couple of plates on which to mount feed valves for the legs. These incorporated the only rivets of the evening - a paltry 12! And little ones at that! Nevertheless, that brings the rivet-count to 2,349!

Then the leg pieces, pistons, et al, were joined together... Much breath was held...


Of course, there is still work to do just to finish this one leg, but it's getting near beddy-bye time.


So there you go: So far, so good. Hope you're enjoying this somewhat time-consuming project! 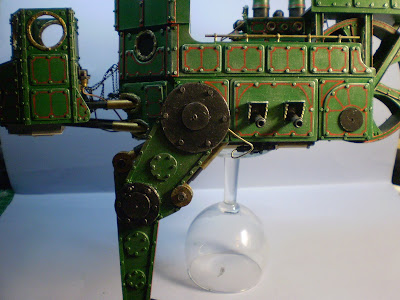 All The Best!
Posted by Colonel O'Truth at Wednesday, September 07, 2011 6 comments:

The Belly Of The Beast 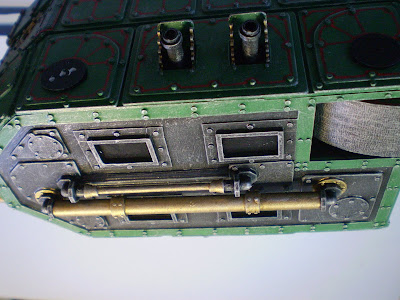 It occurred to me that given the sheer size of HMSW Gargantua, much of the time when playing games or taking photographs from a model's-eye point-of-view, I would be looking up at her. And I had so far done nothing regarding the detailing of her underside.

This had to remedied, and quick-sharpish, Sir!

So, in a rush of enthusiasm, I attacked the problem from underneath. Just as any self-respecting Englishman always does.

Fortunately, I still haven't glued-on the engine, so I was able to remove this, flip the model upside-down and balance it on its wine glass.

Step One was to outline the underbelly. Adding raised strips to surround an area, and then rivets, you can very quickly achieve an impression of bulk.

Next, using the walker's uncompleted legs as a guide, I marked where recesses needed to be. These will eventually form the openings for huge pistons that will protrude from the body to drive the legs. These, too, were outlined, framed, rivetted, etc.


Once the recesses were in place, panels were added in the gaps. Again, the aim here was to create a feeling of bulk. I also decided to add a linear feature along the length of the model. This took the form of a strip of corrugated plastic, over (under?) which pipes were suspended. These may prove to be vulnerable in battle, but who cares? They look good!


While working on all of this, I was also adding detail to the underside of the head - but more on that later. (It's not finished, painted and pretty yet!)


Finally, after a total of 191 rivets were added, the underbelly was painted.

Not bad for a few hours' work. Time for some grub and a glass or six of port, methinks!

Over the course of a few games and then the Call To Arms convention in Wellington, Leadwood Chapel's spire has received a knock or two.

Given that this evening the model is going to be photographed for an as-yet-to-be-announced reason (ooh! What a tease!) I decided I ought to conduct a bit of a fix-up.


The steeple had to be cut from the church, cleaned up, repaired, modified and put back in place. This was actually far simpler than it sounds, but I thought, "What the Hell, Old Chap! Put it on yer blog!" So I did.

Hope you find it informative.

I'm happy with the result. The repaired steeple is much stronger than it was. I have thought about replacing it completely with a closed-in louvred design, but we'll see how it goes.