A Blast From The Past!

A few days ago I received an email from a splendid chap named Nate, who inquired about an early creation of mine: namely, Pantagruel. 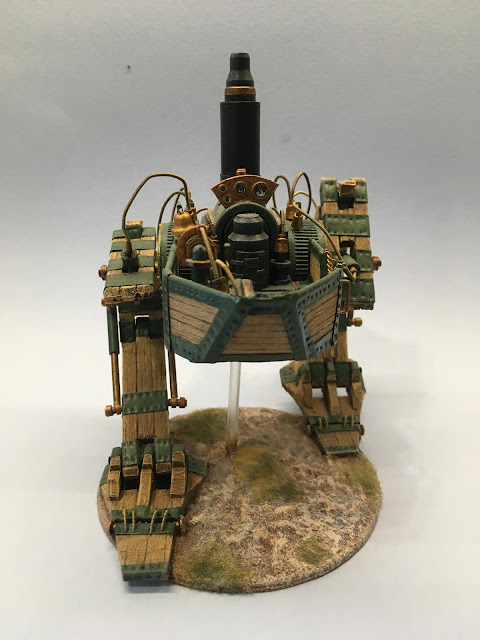 As you may know, Pantagruel was the first Steampunk/VSF creation I made, and was the predecessor to the HMSW Gargantua and the (ongoing, possibly forever...) gigantic walker, Lord Smudgington Smythely-Smythe's Hydraulically Motorvated Sextupedal Land-Traversing Vacational Domicile.


Anyway, Nate asks whether I can go into a bit more detail about the construction of Pantagruel and provide some better photographs, as the ones I have previously posted are, in his words, "a bit fuzzy"...

After I'd wasted half a glass of damned good Cognac, what with spluttering indignantly over the 'fuzzy' remark, I politely replied and said I'd see what I could do. So without further ado, I shall hereby attempt to provide some clearer insight (and photographs, Nate!) of the aforementioned walker!


This project was the first very detailed model I had made in a long time, and I learned a lot during the process: I had to use several different adhesives; I used wood stain on balsa for the first time (which was absolutely essential knowledge when I came to build Leadwood); I had to have the patience to finish numerous components before assembling them, and I rediscovered my love for inventorisioning and creativising, and such like.

Pantagruel is essentially just a boat with a boiler and smoke stack, on legs. The boat part was the easy bit, being constructed of thin card (for strength), with balsa sheet applied to inside and out, to give the illusion of planking. This was 1mm balsa, scored with a traditional HB pencil into 4mm wide planks. Nails were dotted in, along with joins where I wanted them, before the balsa was stained with water-based wood stain. This was applied heavily but immediately wiped off with a rag. When dry, a fairly heavy coat of sand-brown paint was dry-brushed across the grain. You can find out more about this technique in my early posts about Leadwood and the tutorial I wrote for constructing wild west buildings. 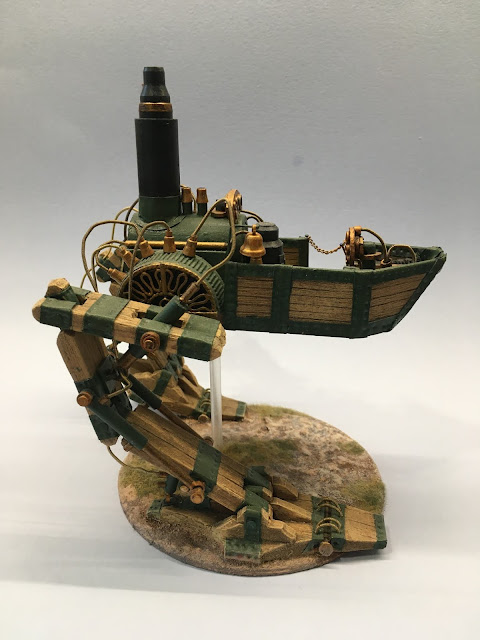 The reinforcing ironwork (in green) was created from brass sheet - acquired from tubes of tomato paste! It was cut and/or scored with a knife and the rivets were dotted in with a blunt pencil (note that a sharp pencil will go through...) This is great stuff, which can be easily smoothed, shaped, cut...


The boiler was constructed from a battery and parts of a permanent marker. The flashing at the bottom of the smokestack is more brass sheet, while the firebox is again part of a marker pen, with detail added in thin card.The smaller components are bits of irrigation thingummies from a hardware store. The bronze-looking display with the gauges is a piece of thick cardboard with slices of plastic tube glued on. The gauges were painted white and detailed with a fine black drawing pen. The driver's display was made in the same way, with levers added made from bent dress making pins. The coal is just grit, glued onto a card backing and painted a slightly shiny black. Finally, the sort-of-filigree design at the rear and sides are cheap bits of jewelry from a craft store.

The 'hips' are two halves of the lid of a plastic medicine bottle, adorned with more irrigation parts and decorated with the same jewelry bits as the rear of the boiler. The bell also came from a local craft store (about $1 for 12 or so) and is mounted on a bent dress-making pin.

Now for the legs and feet...

The legs and feet are made from thick (6mm) balsa wood. They were cut into their component shapes and detailed with pencil as noted above, before being stained and highlighted. As you can see from the NOT AT ALL FUZZY photographs, they are actually pretty rough, as I hadn't developed the patience to sandpaper all the tiny things... Again, reinforcing details of brass sheet were added.


All of the various pistons were planned and made from plastic rod and tube. Each had to be kept as an adjustable component until I was sure I had the legs in exactly the right positions. Then the pistons were glued and painted, before being permanently attached to the legs. Each one has an inlet valve near the top that would later be plumbed-in to a guitar string conduit, and an outlet valve near the bottom. More about the guitar strings shortly...


As you can see, the model's weight is actually taken by a clear rod which is firmly attached to the underside of the body. This was largely due to my poor planning and over-enthusiasm, and something I gave a lot of thought to in subsequent creations. Gargantua for example, is solidly free-standing. With Pantagruel, the legs were pinned to the body with long nails which pass through the upper legs and pistons into the hip assemblies. This is not a robust arrangement and could have been done much better.

The very last details were the conduits. These were made from old bronze-wound acoustic guitar strings, which look great in my opinion and do not need to be painted at all. Each of these had to be cut to the right length for its particular place, and shaped with pliers to look right. This is fiddly work, as they retain a bit of spring and can easily damage the model once glued into place, as they can pull it apart again.

Finally, a note about adhesives and paints:

The following glues were used:

So there you go. I hope this episode has been informative and helpful!

For what it's worth, there's a Mark II version of Pantagruel on the old drawing board, and I'll be letting you know how that goes! In the meantime, I have hundreds of tiny goblins to paint, a castle on a dinosaur to finish, a wizard's tower to complete, the ongoing life-sapping concept that is Lord Smudgington Smythely-Smythe's Hydraulically Motorvated Sextupedal Land-Traversing Vacational Domicile and God only knows what else!

Scaling It Back A Bit


It's taken me a couple of weeks to get around to this post, what with all this Covid-19 lockdown thingummy whatsit. Rum deal, eh what!

First and foremost, I hope you are all well and that things aren't too bad for you, wherever you are!

That said, on with the blog...

As you may be aware, my posts have become something of a rarity over the last couple of years, so it was with some trepidation that I approached the old dusty boxes and shelves of model making supplies and whatnot and took stock of what I had...

Not much, as it turns out! Certainly, with no way of getting hold of new materials, paints, adhesives and so on, large projects like my immense walker and other VSF/steampunk machines were going to be something of a problem! So what to do?

The answer, I decided, was to think small.

Years ago, I began collecting 10mm fantasy miniatures and even went so far as to post a bit about them on this blog, but I never really got very far with them. Now, however, seems the perfect time to get back into this subject - after all, in such a small scale creations can bloom from off-cuts and little bits and bobs, with no need for large volumes of paint, glue and so on.


I have quite a lot of orcs already painted, but they're all rather predictable - warriors, archers, wolf riders, etc. Lovely models for sure, but a Colonel O'Truth army needs a touch of weirdness. And 10mm is the perfect scale for thinking big while staying small.

Obviously, I needed a goblin castle on the back of an enormous purple ankylosaurus.

The first thing to do was to get the cheap plastic dinosaur looking good. For this, I applied my usual ink-wash and dry-brush technique, starting from a white undercoat and brown all-over wash. And in between drying times, I would also start designing the castle...

The castle started to take shape a bit at a time, using nothing but off cuts of plastic board and cheap card. The intention here is to get a bit ridiculous... The final model will have some rather fun details I'm keeping to myself for now.

Once the structure of the castle was ready, I started to add stonework with greenstuff. Again, I have a limited supply of this stuff, so working in very small amounts is important.

While this was all going on and copious amounts of coffee were being consumed, I was also giving some thought to what kind of terrain I want for this lot. After all, fantasy is the perfect genre for getting weird, using bright colours, and having fun. So why stick to traditional hills, woods, and so on for the table top? I mean, why not make a mountain out of a plastic skull?

And so began the construction of a new modular fantasy tabletop...


More on that subject later...


Anyway, I think I've made a pretty good start on this one! There's plenty still to do on the dinosaur, some pretty cool terrain taking shape which I'll share with you soon, plenty of models to paint and lots of ideas for oddball fun elements - all without the need for heaps of new materials. And rest assured, there's more steam powered madness on the drawing board!