Hi, All!
As followers of this blog know only too well, I have something of a riveting problem. That is to say, my creations tend to have a disturbing number of hand-cut and glued rivets.
So, I thought it might be fun to to take a look back at some of my creations over the years, and list them in order of their rivet counts!
Therefore, without further ado...

I hope you enjoyed this brief trip down memory lane. Please browse the older posts of this blog for more about all of these monstrosities and feel free to ask questions!
All the Best!
(p.s. I am now also on Instagram! Follow me there!)
Posted by Colonel O'Truth at Monday, May 31, 2021 15 comments:

Once again I find myself writing to you after something of a long break, but here I am... hale and hearty with many a rivet!

And so, with a song in my heart, a snorkel in my mouth and glue on my fingers, I set about building my version of The Nautilus from Jules Verne's 20,000 Leagues Under The Sea...

In the time since my last post, not only had I not done much model making, but I had also moved house and set up a new hobby room. Consequently, I had lost track of what bits and pieces I had. So began an epic rummaging session, aided by two kittens. The results... paint pots, a plastic wine glass, cogs, guitar strings, a cotton bobbin, garden irrigation components and a heat sink from a light fitting.

The basic structure of the vessel was the easy part. I wanted something a bit more interesting than just a tube, but being a submarine, the model needed to look streamlined. I very quickly glued together a few components to give me a starting point, and then started adding details.

A vessel is nothing without its captain, so I decided early on that I would be including Captain Nemo, and that this would necessitate a clear canopy of some kind, along with a detailed interior. Fortunately for me, I had some plastic wine glasses whose diameter was a perfect match for the paint pots!

I started Nemo off with a plush-looking chair for comfort and built him up from there using bits from a plastic Mahdist (Perry Miniatures) a British Line Infantryman (Black Powder Miniatures)  and lots of Greenstuff. I also built him a control panel, into which the rods I had him holding would neatly fit when everything was ready.

Then I turned my attention to the bridge, where most of the work and detail would be. I started this with the lid from another test pot and a basic cardboard structure. Planking was added using a piece of pre-stained and detailed balsa I had left over from building Leadwood City years ago.  The whole thing had to be gradually shaped to fit snugly inside the wine glass that would eventually form the canopy.

All of this had to be painted before it would be sealed inside the wine glass forever so that I could work on the rest of the machine. This involved adding paint and details to the inside of the wine glass to give a solid appearance - if I had only focused on the outside of the glass the end result would have been less satisfactory.

I wanted the sub to have a fish-like quality, so a big dorsal fin was cut from plastic board, and additional streamlining was added to the engine at the rear. Here, the basic flatness of the cardboard fins was disguised using thin strips of card to bulk-up the outer edges like a T-girder. of course, there would later be rivets!

I also added a great big mean-looking spike to the sub's nose!

And then it was time to think about a base to mount the whole thing... and to start adding RIVETS!

The base is just a simple piece of MDF board, with brass rod shape to look like some sort of wavy plant, while supporting the model's weight. This was then built up using DAS clay and detailed using shell-like beads, plastic aquarium plants and a toy octopus.

I started painting the model by masking off the clear canopy and spraying the whole thing black. A generous coat of a nice greeny-blue colour was applied, followed by grimy looking ink washes and dry-brushed highlights. The copper parts were tidied up and washed with chestnut ink. The steel was just left black then dry-brushed with a gunmetal metallic paint.

Finally, the painted toy octopus was added to the base and a few more guitar string conduits were added to the sub. Et, voila! Done! 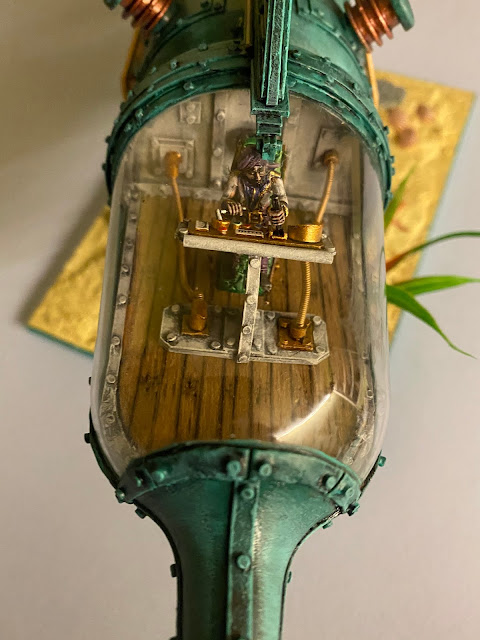 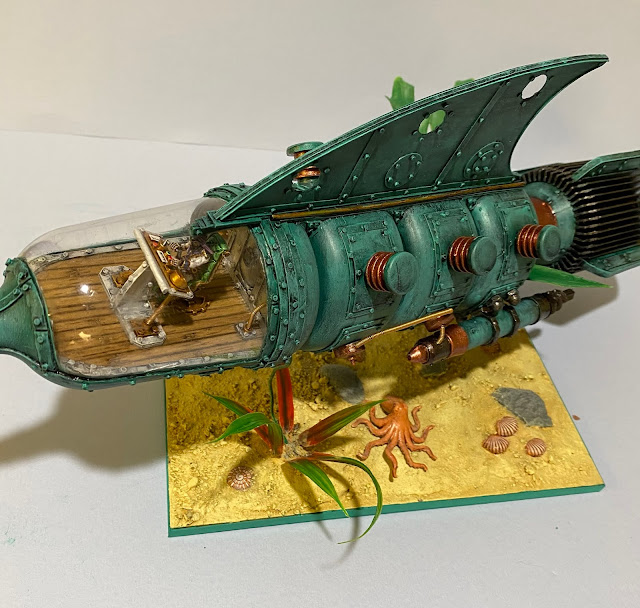 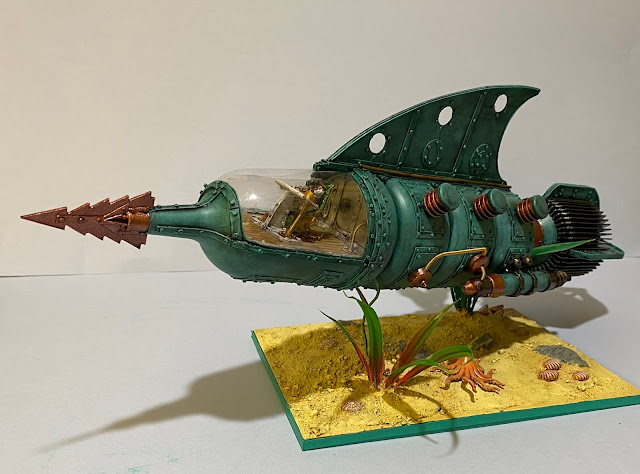 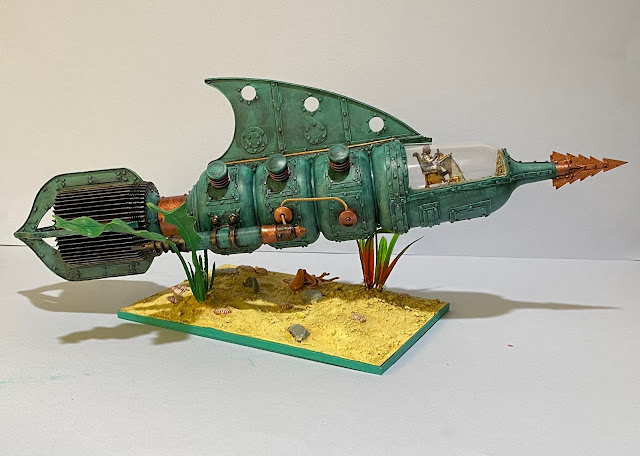 And in case you thought I'd forgotten, the RIVET COUNT for this one is 843!

Another commission is already on the way. Until then...