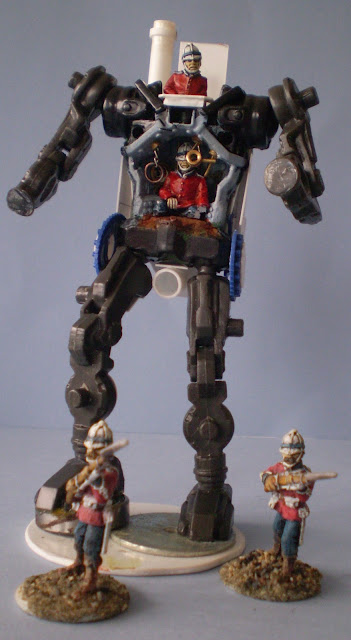 Well, it's time for another bit of VSF nonsense. So without further ado, let me introduce:


In 1856, Sir Joseph Bazalgette (1819-1891) was commissioned to redesign the London sewers - no mean task - and although he rose ably to the challenge, there were certain elements of the job he found rather distasteful.
Thus it was that in early 1857, he unveiled the Joseph Bazalgette Steam Driven Wading Suit - a small, one-man vessel capable of carrying him in comfort and with clean, dry shoes throughout the vast network of stinky tunnels that had become his Big Job.
It was while clanking his way through the foetid labyrinth of Putney that he encountered the now infamous Putney Sewer Trolls. Armed with only a scented handkerchief and an iron 250 horsepower right foot, he sent the blighters packing all the way to Mayfair, where their howls and moans attracted the local constabulory.
Needless to say, the Daily Telegraph's report of this heroic feat drew the attention of the War Office and Bazalgette was afforded a brief respite from his backed-up work load to design a similar vessel for use by the military. This took a while, with many adjustments and perfections to be made - and much rising stink from the abandoned and unfinished sewers - until in late 1862, William Cubitt, Lord Mayor of London, protested to the Palace that enough was enough and Sir Joe really ought to get back into his element. Resigned to his responsibilities, Bazalgette handed over the new machine to The Right Honourable Sir George Cornwall Lewis, Her Majesty's Secretary of State, and clanked off back into the poo.
Or so I've been led to believe.
While browsing the local cheap bits and pieces shop with my daughter the other day, I came across this somewhat familiar-looking character. "Blimey," thought I, "If anyone needs more rivets, he does!" And for only $3 who could blame me?
So began the gutting and rebuilding of the "Steel Warrior" (hmmm?)...
At first, I admit, I was going to do the stick-rivets-on-and-put-a-bloke-in-the-head thing. But I realised that there was room in the body for a driver -and even with rivets, the smooth curves of the superhero would just be too, well... smooth and curvy.
So I got a bit brutal, hacked out the guts, and started gluing bits of stuff on...
Because I intend to close-in the driver with a glass canopy, the first thing to do was complete the cockpit. I added plates at the back, detailed them with rivets and a guage, painted everything, added conduits and a union flag and stuck in the driver.
Once this was done, I attached the legs, poured superglue into the joints and stuck the whole thing to a base I had weighted down with a washer and a small bearing. These will be sculpted over later.
Next, I turned my attention to the engine. Really, this just sort of grew as I stuck on first a boiler and a chimney and then other bits and pieces where they looked right, including a rudimentary hatch for the gunner up in the head. He, too, will be closed in with glass.
A twin Gatling gun will replace the left hand (the toy's hands were far too 'fleshy') and a mechanical claw will replace the right.
Finally (so far) I added cogs and pistons to give the legs some form of believeable(!?) driving mechanism. I will treat the arms and ankles similarly.
So there you are.
I'll post more as the suit takes shape.
All the Best!
Posted by Colonel O'Truth at Tuesday, March 13, 2012 15 comments:

Just a Quickie Before Bedtime...


Just thought I'd jump on here and bring your attention to the links at the left of your screen, under the heading, "The Colonel's Issues"...


I've had a little rearrange of the blog today, most notably putting up a new page: "Weapons of Mass Delusion". Here, I have posted a little about Pantagruel, Gargantua and The Faraday Galvanic Field Gun, along with nice big photos and a list of the posts (and links) that went along with the development of each project. As new creations rumble forth from my workshops, I'll add them to the page.


I hope this makes it easier to browse this blog. Your feedback is greatly appreciated!

How to Train Your Dinosaur...


This evening, I am pleased to announce that the Faraday Galvanic Field gun, generator and Big Mike are complete!


Since my last post the generator has been finished and painted (as has the driver) Big Mike and both wagons have been based, and  Big Mike has been given some reins.


Admittedly, I need an engineer for the generator, but I don't have an appropriate figure to hand. I'll have to go searching.

It occurs to me that I own more of these dinosaurs and wagons...


Big Mike's reins were made from very thin strips of brass sheet. I've got loads of this stuff, liberated from used-up tubed of tomato puree. They hold their shape nicely and go all the way to the driver, overlapping the join between the separately-based models. (I decided to base the three parts separately, of course, to allow for maneuverability on the table top.)


I must say that I'm very pleased with how this has turned out. It started as a bit of a silly idea when I was just messing with bits of junk and has turned into something I'm rather proud of! Can't wait to get it onto the battlefield!


Not a bad result, if I say so myself!

That's all for now - there's a new weapon on my table as we speak. Watch this space!

I've been slogging away at the generator for the Faraday Galvanic Field Gun for the last couple of evenings and I'm pleased with the progress so far.

I honestly wasn't really sure how I wanted this to look at first, nor was I convinced that I could make the carriage look bulky and 'full' enough. What I did know, however, was that I wanted a couple of seriously chunky electro-magnets to form the main part of the design.


So... I started gluing stuff together.

Obviously, I had already designed buffers and coupling stock to correspond with those on the gun. These and a nice wide deck formed the beginnings of the design. Other boxes and panels were added to disguise the carriage and stop it looking too similar to the gun carriage, as both carriages were built from identical pencil-sharpener wagons.


After a quick sketch I did at work while making a cup of tea, I came up with what is essentially a ninteenth-century circuit-board, reasoning that so long as there were wires joining all the bits and plenty of rivets, I couldn't go far wrong. Adding a couple of levers and a starter-dynamo-thingummy seemed like a good idea. There's also a gantry with handrail and ladder for an engineer to operate the controls. Oh, yes: it needed a spinny-thing. Of course.


A new touch I came up with was the inclusion of hexagonal bolts to denote removable panels. The bolts were cut from hexaonal plastic rod, with slots cut across their tops.


Stripped copper wires and (of course) guitar strings complete the look. Two fat cables run out towards the couplings, carrying power to the gun itself.


All this took a whole evening, with the final touches going on today. Painting is now underway and should be finished tomorrow.

HMSW Gargantua made the local news today, after news of her creation was leaked to the press by a spy at the construction yards... Thanks, Roly!

Although slightly misquoted (the height of Sheffield steel was the Victorian Era - how old do I look?!) I'm nevertheless a happy Colonel. It's nice to get a bit of recognition!

Anyway, there you go. More on the Faraday Gun coming soon, and I'm working on designs for five more VSF weapons and an outrageously ambitious project that will put Leadwood, Gargantua and everything else I've done so far to shame!

The Evolution of Big Mike


I introduced Big Mike as the sturdy beast responsible for bringing the mighty Faraday Galvanic Field Gun to bear upon fuzzy wuzzies, huns, sneaky cossacks and all who oppose Her Majesty. Since then, he's gained a bit of character.


The first thing to do was add a harness with which to pull the gun carriage. This was constructed from styrene rod, bits of jewelery chain, wire, and green stuff. Buckles were sculpted into the straps.


Following the harness, I decided I wanted Big Mike to carry a few spare machine parts too. These were constructed from bits, glued into place and 'strapped' in with greenstuff and wire buckles.


Now came the painting! I approached Big Mike with my favoured inking technique. (See 'Working With Inks... Link )This is fairly quick and very effective - particularly for reptiles!

During this session, I also modified the gun carriage slightly. My intention is that a second carriage will be pulled behind the first, bearing a generator for the gun. This is building on a suggestion from Argsilverson, a colleague on the Lead Adventure Forum Link who thought a generator would be needed and offered some good ideas. I decided a train, rather than a separate vehicle, would be fun.


For this reason, the back of the gun carriage now bears coupling gear and buffers - but more about that later!


So there you go! I hope you like Big Mike! More later!

"I Name This Walker... Gargantua!"

Today has been something of an epic detailing day and I am pleased to announce that fifteen minutes ago, I completed HMSW Gargantua - my most ambitious undertaking to date.


Since my last post, I have added leaded glass to the portholes, a retractable ladder to the Aft Gallery, handrails on the Rear Deck, steps from the Main Deck to the Rear Deck, coal in the bunker, a Union Jack and, of course, Her Nameplate.


The glass turned out well, I think. It was made from acetate, scored with a pin and rubbed with black paint. The frosting effect around the edges is accidental - the fumes from the superglue I used reacted with the acetate. I rather like the effect.


The retractable ladder and the steps had to be made and painted as separate pieces, then fixed in place. Fiddly work!

I also managed to add a good strong clear peg under the raised foot. The model is now very sturdy indeed and will not need a base. This is important, as it is so big, it will need to pass over forests, houses and other terrain, which would not work with a big clumsy base.


Complete with her crew, Gargantua's a colourful affair. I'm looking forward to getting her onto some approriate terrain.


3,630!
I think that's probably enough to satisfy even the most ardent rivet fans out there.
So there you go. Stay tuned for more on the Faraday Galvanic Field Gun and Big Mike the Dinosaur... and a NEW weapon of terror, also started today!
All the Best!
Posted by Colonel O'Truth at Monday, March 05, 2012 22 comments: